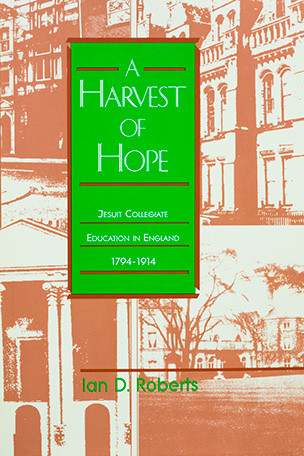 A Harvest of Hope: Jesuit Collegiate Education in England 1794–1914

A Harvest of Hope challenges some of the myths about Jesuit education in England in the 19th century—including the belief it was only available to the elite. In fact, Jesuits provided a broad education to many Catholic boys from middle–class and working–class families, according to Ian Roberts. He chronicles the formidable challenges of establishing (or reviving) Jesuit schools and maintaining them in the face of hostility from not only Protestants but also some in the English Catholic Church. The story begins with Stonyhurst College, founded in 1794, only 21 years after the repression of the Society of Jesus. These schools, Roberts writes, “provided circumstances under which an English Catholic schoolboy could enjoy a secondary education which was equal to that of any other boy in the country but which nevertheless possessed the vital element of religious faith.” A Harvest of Hope, whose title refers to the seeds planted in the “seemingly barren ground” of the 1790s, includes data on the enrollment in English Jesuit schools as well as the economic status of their students.