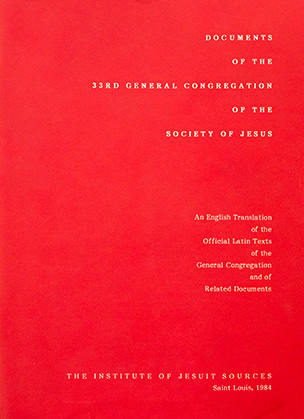 Peter–Hans Kolvenbach, S.J., was elected superior general at the 33rd General Congregation of the Society of Jesus in Rome in 1983 following Fr. Pedro Arrupe’s resignation for health reasons. This volume provides a complete translation in English of the official minutes of the nearly two–month gathering, which drew 223 members from provinces around the world. Included are the six decrees approved by the Congregation, beginning with “Companions of Jesus Sent into Today’s World,” which reaffirmed the guiding principles of the Society’s apostolic efforts. Also included are the homilies of Pope John Paul II, the newly elected superior general, and various official addresses and letters. These materials were originally published in Decreta Congregationis Generalis XXXlll…anno 1983.