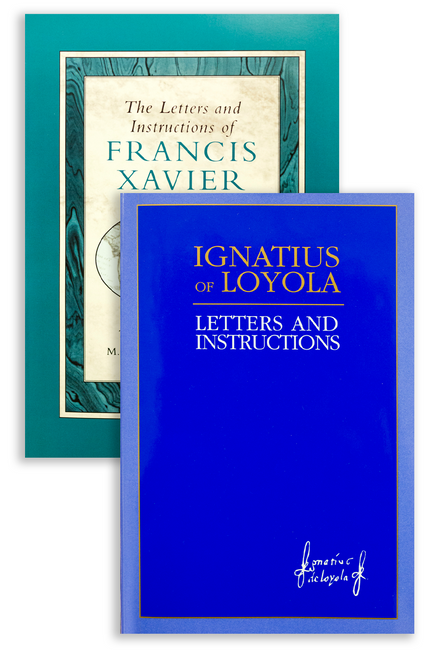 In celebration of the 400th anniversary of the canonization of both St. Ignatius of Loyola and St. Francis Xavier, get a copy of both of their letters and instructions for 20% off for a limited time.

Ignatius of Loyola is well known for his Spiritual Exercises and the Constitutions. But he was also the author of about 7,000 letters, some 370 of which are contained in a volume that is now the largest such collection in English. Addressed to popes and future popes, cardinals and bishops, emperors and kings, relatives, penitents, friends, pilgrims, students, and fellow Jesuits, the topics of the letters range across a spectrum of personal, political, social, educational, financial, and, especially, religious concerns. Their style and tone depend on the recipient, varying from businesslike, warmly personal, courtly, gently reassuring, direct, or stern.  SKU 1113

One of Ignatius of Loyola’s first companions and followers, Francis Xavier (1506–52) was also one of the most influential missionaries in the history of the Society of Jesus. “His major achievement was to consolidate and spread the Christian faith in India and…the Indonesian archipelago, and to introduce Christianity to the newly discovered islands of Japan,” M. Joseph Costelloe, S.J., writes in his introduction to this volume. Fr. Costelloe, who translated this work as well as Georg Schurhammer’s definitive, four–volume Francis Xavier: His Life, His Times (Rome: Jesuit Historical Institute, 1973), assembles 138 letters and documents in The Letters and Instructions of Francis Xavier. The letters, which detail his journey and work throughout Asia, were widely circulated in Europe, where they were celebrated for their scholarship on other cultures and for what poet John Dryden called their “glowing with the love of God.”  SKU 1088