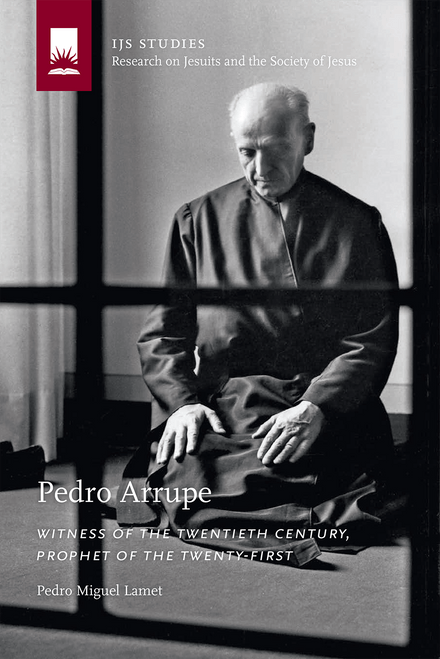 The renown of few contemporary church figures has grown as much over time as that of the charismatic General of the Jesuits, Pedro Arrupe (1907-1991). Born into a bourgeois family in the industrial city of Bilbao, he studied medicine in Madrid, but after several years of study he left medical school to join the Society of Jesus, where decisive events awaited him. Expelled from Spain during the Republic, Arrupe was a citizen of the world by vocation and formation. During World War II he worked as a missionary in Japan, where he was accused of being a spy and imprisoned. He directly witnessed the explosion of the atomic bomb dropped on Hiroshima, and he used his medical knowledge to attend to the victims.

In his position as Superior General he became one of the most captivating agents of change in the Church of the 20th century. At the same time he was a prophet for the 21st century, which he anticipated with many of his brilliant intuitions regarding justice, education, racism, globalization, the marginalization of women, and the plight of refugees and drug addicts. In the last fifty years, nearly one hundred Jesuits, inspired by Arrupe’s insistence on both service of faith and promotion of justice, have given their lives for defending the poor.

Pedro Miguel Lamet researched Arrupe’s life for five years in Rome, Japan, and the Basque Country, and he had the privilege of spending many hours conversing with Arrupe after he had suffered a debilitating stroke. Drawing on a vast variety of sources, Lamet has written this entertaining and captivating biography, which has been revised several times and is already a classic, available now for the first time in English. Fr. Adolfo Nicolás, S.J., the 30th Superior General of the Society of Jesus states in the prologue, "this biography has the merit of being the very first to trace with fidelity [Pedro Arrupe's] human and spiritual profile and to make it available to a larger public."

This book is part of the Jesuit Sources imprint, IJS Studies: Research on Jesuits and the Society of Jesus.

"A magisterial biography of one of the great Christians of our time."
- James Martin, SJ, author of The Jesuit Guide to (Almost) Everything

Prologue: The Magis of Father Arrupe, by Adolfo Nicolás, S.J.

Introduction to the New Edition: The Twenty-Five Years of a Book

2. The Adventures of “Peru”

3. From Doctor to Jesuit

6. From Cleveland to Yokohama

9. Light in the Prison

13. Leader of a World in Miniature

14. General for a Council

16. In the Crater of a Volcano

Epilogue: Prophet of the Twenty-First Century