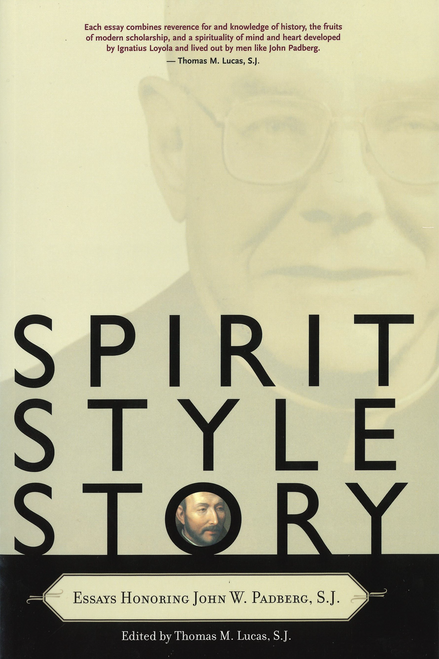 John W. Padberg, S.J. (1926–2021) was one of the founders of the U.S. Jesuit Conference and later served as president of the Weston School of Theology and as director of the Institute of Jesuit Sources.

This eclectic set of 16 essays by Jesuit and lay scholars was published to honor the scholar and Jesuit leader John W. Padberg, S.J., on his 75th birthday. Spirit, Style, Story reflects Padberg’s deep spirituality, his humane style, and his passion for history. These essays touch on the passions of his life: spirit and spirituality, style and beauty, and most of all history. Each in its own way is an attempt to combine reverence for and knowledge of history, the fruits of modern scholarship, and a spirituality of mind and heart developed by Ignatius Loyola and lived out by men like John Padberg for the past 500 years. Contributions range from Michael J. Buckley’s “‘Likewise You Are Priests…’: Some Reflections on Jesuit Priesthood” to Peter J. Togni’s “Novices in the Early Society of Jesus” to Michael W. Maher’s “The Just Development of Mind and Heart: Jesuit Education at the Turn of the Century in Milwaukee, Wisconsin.”

From the "Letter of Greeting" by Peter-Hans Kolvenbach, S.J. to John W. Padberg, S.J.:

"Your love of God, as Saint Ignatius urges us, has manifested itself in deeds, and not just in words—although quite often your "deeds" have issued in the publication of many "words." Our Jesuit brotherhood has been richly blessed because of your great passion for our history and our life. You have not only explored that history in your research and work as editor, you have almost literally lived it, bringing insights from the past to bear on our contemporary world and the Society's role in it. And you have done this with great verve and an evident love for whatever topic you are treating."

"Likewise You Are Priests...": Some Reflections on Jesuit Priesthood by Michael J. Buckley, S.J.

Discernment of Spirits as an Act of Faith by William A. Barry, S.J.

Intellectual Conversion: Jesuit Spirituality and the American University by Joseph A. Tetlow, S.J.

The Florentine Reformers and the Original Painting Cycle of the Church of S. Giovannino by Gauvin A. Bailey

The Council of Trent: Myths, Misunderstandings, and Misinformation by John W. O'Malley, S.J.

Novices in the Early Society of Jesus: Antonio Valentino, S.J., and the Novitiate at Novallara, Italy by Peter J. Togni, S.J.

Sparrows on the Rooftop: "How We Live Where We Live" in Elizabethan England by Thomas M. McCoog, S.J.

The Just Development of Mind and Heart: Jesuit Education at the Turn of the Century in Milwaukee, Wisconsin by Michael W. Maher, S.J.

The Constitutions of the Society of Jesus, Part VII, Missioning