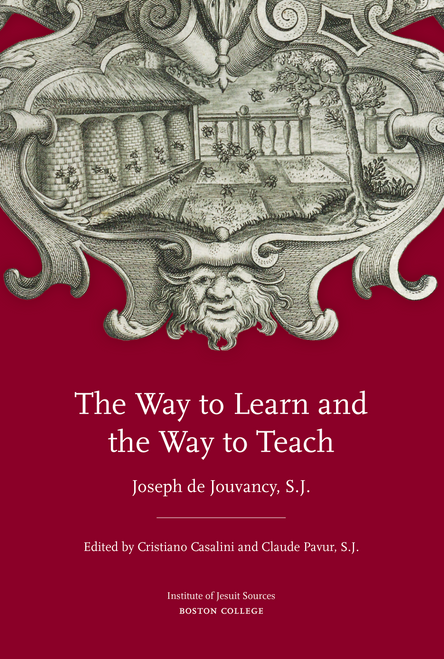 Joseph de Jouvancy was a French Jesuit poet, pedagogue, philologist, and historian. According to his biographer Victor Alet, he proved a talented student at the Jesuit college of Clermont, where he would later work for a while. The educational historian Robert Schwickerath called the Jesuit father Joseph de Jouvancy (1643–1719) “one of the greatest authorities on education of his age.” A classical humanist and scholar known for his plays, biographies, histories, orations, and translations of various works into Latin, Jouvancy left behind no work more influential than his De discendi et docendi ratione (The Way to Learn and the Way to Teach, 1703). The Jesuit order found his work so important for maintaining quality in the Society’s schools that it made it a companion piece for the great charter of Jesuit education known as the Ratio studiorum (1599). In this book, Jouvancy first describes how young instructors might effectively pursue their own studies during their years of teaching; secondly, he details the essentials of good teaching. The considerable historical interest of this book is matched by its pedagogical insights and perennial relevance.

This volume presents an English translation as well as the Latin of the 1703 edition of Jouvancy’s Ratio, the version produced pursuant to the decree of General Congregation 14, whose authority it invokes on its very frontispiece.

With ever-widening appreciations, reflections, and research initiatives, Joseph de Jouvancy’s The Way to Learn and the Way to Teach will serve as an essential prism through which one can see how the Jesuit cultivation of humane letters for the sake of personal formation entered the eighteenth century without any renunciation of the prestigious humanist tradition that had graced the Society’s colleges since the dawn of modernity.

"If we are to ask why we might read Jouvancy today, beyond the obvious historical and scholarly interest that he holds, we could be told that the work itself will suggest more than enough of an answer. There is much edification in the vision and inspiration of a true educator who understands the real worth of a teacher’s calling. Young teachers will discover here invaluable experience-based practical advice and prompts (from the humble to the lofty) for thinking through the habits and attitudes and practices that will both help them succeed in the classroom and raise their employment to the level of a great vocation, one that is critical for the spiritual, emotional, cultural, and intellectual maturity of their young charges."  - Introduction, The Way to Learn and the Way to Teach

"The translation is excellent: it is clear and faithful, managing to walk the line between stiff literal and loose readable prose. [...] Scholars of the history of education or those interested in the history of Catholic pedagogy can now approach a text that would otherwise be inaccessible." ~Patrick M. Owens, Bryn Mawr Classical Review

"The notes to the translation give readers a good sense of the range of sources, both ancient and recentiores, cited by Jouvancy. The translation itself, with en face Latin, is smooth and accurate, and the book as a whole nicely produced, with a useful index." ~Yasmin Haskell, Archivum Historicum Societatis Iesu

"Its lessons are relevant for teachers of any age group. But, given that Jesuit colleges in the early modern period served students (generally) between the ages of 10 and 20, much of what is said in the De ratione is particularly relevant to both high school and college educators today." ~Evan Dutmer, The Journal of Classics Teaching

"In the present edition, the original Latin text appears side by side with the complete English translation, with a light but useful annotation, plus an introduction and an index. The new translation is very elegant and reliable... We have here a very helpful edition that will be most welcome by all scholars in the history of education or simply interested by Jesuit education in the early modern period." ~Frances Goyet, Renaissance Quarterly

Part One: The Way to Learn

Chapter 1: Knowledge of the Languages

Chapter 2: Attaining an Understanding of the Disciplines

Part Two: The Way to Teach

Chapter 1: Imbuing the Students with Devotion

Chapter 3: The Most Important Safeguards for Good Teaching