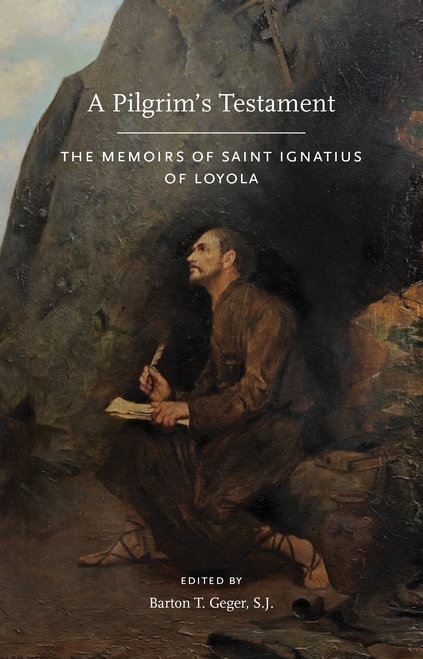 Early Jesuits urged Saint Ignatius of Loyola (1491–1556), founder of the Society of Jesus, to share the story of how God had worked in his soul. His memoirs, they hoped, would inspire and guide Jesuits and other readers for years to come. Barton Geger, S.J., provides a new introduction and original annotations for this edition of A Pilgrim’s Testament.  Geger includes fascinating notes that accompany this important text, making the autobiography of Ignatius of Loyola more accessible to all.

St. Ignatius of Loyola (c.1491–1556) was a Spanish nobleman who had a spiritual conversion when he was thirty years old. Ignatius did two things for which he is famous. First, he wrote a little book called The Spiritual Exercises, which is a manual of sorts to guide people through a thirty-day silent retreat.  The second thing that Ignatius did, after he became a Catholic priest, was to create a fraternity of priests and lay brothers called the Society of Jesus, or the Jesuits for short.

Readers will find Ignatius struggling with many of the same questions and tensions that Christians face every day: Why should I belong to the church, if I can follow God in my own way? What should I do with my life? How do I fight this temptation? How do I know when God is trying to tell me something? Is it ever acceptable to say “no” to good people who ask for my help?

"The very best English translation of the Autobiography with a superb introduction, helpful footnotes and appendices, this new edition is bound to become the English-language standard."

- James Martin, S.J., author of The Jesuit Guide to (Almost) Everything

"Geger opens up the thought-world familiar to Ignatius. This is an invaluable help to understanding this unique text."

The Constitutions of the Society of Jesus and Their Complementary Norms: A Complete English Translation of Official Latin Texts - Paperback

The Spiritual Exercises of Saint Ignatius: A Translation and Commentary - Paperback